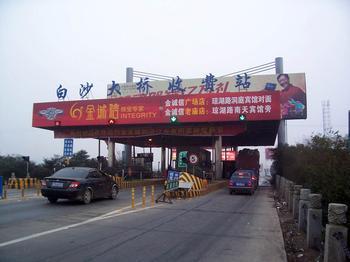 On January 18, the Yiyang City Transportation Bureau issued a special clean-up of the toll highways in the city: 3 of the 5 operating highway toll stations were successfully removed, and 2 were retained according to law.

In May 2011, the five ministries and commissions of the State issued a notice to adjust the toll policy for highways and launch a special clean-up of toll highways nationwide. In accordance with the requirements of the ministries and commissions and the deployment in the province, the relevant departments of Yiyang City sent personnel to clean up the five toll stations in the country. After investigation, it was verified that the spacing between the Baisha Bridge and the Zhulian Toll Station was insufficient, the operating period of the Xilin Port toll station was postponed and extended, and the Qiqiling toll station was a bundled charge for Changyi Expressway. In response to the above-mentioned problems, proposals for the rectification of the removal of the three toll stations at Baisha Bridge, Xielin Port, and Qiqiling were proposed, and the relevant government agencies submitted relevant rectification plans to the provincial government. On October 1, 2011, the Qiqiling Toll Station canceled charges. On December 31 of the same year, the toll station at the Shering Port was terminated. On January 10 this year, the Baisha Bridge toll station stopped charging.